These events and practices are made available through your generous support. Please consider donating to the center.

For Drikung Seattle retreat events you can come in person or on zoom.  We can have 10 people stay in the center for retreats, please contact the center for the latest regarding available space. 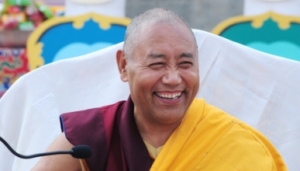 Khenchen Gyaltsen Rinpoche
The venerable Khenchen Kochog Gyaltsen Rinpoche was born in 1946 in the village of Tsari, one of the most sacred places in Tibet and spent his early years there. In 1959, Khenchen Rinpoche fled to India with his family during the political changes in Tibet. In October 1967, Rinpoche travelled to Varanasi, India to further his studies in the Central Institute of Higher Tibetan Sutdies. There, Rinpoche began 9 year course of stuyd which included Madhyamika,,, Abhidharma, Vinaya, Bhisamayalamkara, Uttaratantra, as well as history, logic, and Tibetan grammar. in early 1968, he took full monastic ordination from the great Kalu Rinpoche. Back in 1982, Khenchen Rinpoche travelled to the United States with the requests many practitioners. By late 1983, the Tibetan Meditation Center was well established in Washington D.C., but later moved to Frederick Maryland where there are innumerable teachings, practices, and retreat.

Register early at info@drikungseattle.org to secure your seat. Maximum in-person seating capacity: 40
Suggested Donation $100 Fri-Sun in person or $60 online. Members get 10% off. Donate
No one will be tuned away due to lack of funds.
ZoomID will be sent to your email after registration.

Schedule – All times are PST